OK, so today, we are just looking at a handful of items related to the last 4 days of the four year tribulation period of Trump’s hostile and destructive occupation of the White House.

First on the list, is an interesting narrative in wide circulation right now – mostly being disseminated by Republicans, but coming also from some bleeding heart liberals.  To put it in shorthand, it is the notion, or the contention, that the second impeachment (done deal) and subsequent trial in the Senate, to convict – is likely to “divide the country more than it already is.”

GOP Reminding Democrats Of Unity Call: Too Little Too Late

There’s another angle to this that is worth examining as well. One of Trump’s and the Trumpublican party’s signature policy platforms was the theme of “Law and Order.”

“The words ‘law and order’ are words that Democrats don’t like to use. They don’t think they’re politically good. There’s nothing wrong with law and order. There’s law and order, and you shouldn’t be ashamed of it.”

– Donald Trump at a campaign event in Minnesota

The entire Republican party took the “Law and Order” drum and beat it incessently throughout Trump’s presidency and increased the tempo in the two years leading up to November 3rd.

Now, however, that Trump is facing consequences including never being allowed to run for any political office again, his Secret Service protection stripped and all other benefits accruing from having occupied the office of the presidency, the GOP is not all that enamored with ‘Law and Order’ – at least as it concerns those within their ranks.

They want law and order to be shelved in favor of the system ignoring Trump’s pattern of crimes. Why? – for the benefit of “bringing the country back together.” House Minority Leader, Kevin McCarthy (CA), is the poster boy for the about face in emphasis, saying earlier in the week that:

Personally, I continue to believe that an impeachment at this time would have the opposite effect of bringing our country together when we need to get America back on a path towards unity and civility.

I’m just saying that it is curious after 4 years of Republican stoked divisiveness and reckless political speech, now just happens to be the time to sit down to the table and play nice. Excuse me, but aren’t these the very same people that were chanting at the top of their lungs, “LOCK HER UP!”?

No reasonable person believes that the 197 GOP representatives in the House are going to suddenly adopt bi-partisanship toward President-elect Joe Biden or Democrats in Congress.  Which brings us back to the core principle.

Letting Trump off the hook for his crimes, would be a race to the bottom that Trumpublicans are already leading and would do nothing to cool off the national divide. The damage to the rule of law is not worth empty promises of unity.

Fortunately, the FBI has no intentions of ignoring what happened 10 days ago at the Capitol – either those who personally committed crimes or those who incited the violence and destruction of public property. This, from FBI Washington Field Office Assistant Director in Charge Steven M. D’Antuono, issued yesterday:

We continue to work closely with our partners in the DC U.S. Attorney’s Office, as well as with other law enforcement partners here and across the country. I want to take this opportunity to thank them for their partnership and collaboration in tracking down, arresting, and charging those responsible for the Capitol riots.

FBI personnel continue to work day and night gathering evidence, sharing intelligence, and working with federal prosecutors to bring charges.  To date, we’ve identified more than 270 suspects involved in criminal activity in and around the Capitol.

The FBI has arrested more than 40 subjects, and—with the help of our partners around the country—more than 100 individuals have been taken into custody.  We are methodically following all the leads to identify those responsible and hold them accountable.

We thought you might be interested in looking at one of the arrest warrants the FBI has in the system, to get a flavor for the process. This is an affidavit submitted to the court of Federal Judge Zia M. Faruqui, from Special Agent Melissa Ammons:

If anyone has been seduced by the notion that as soon as Donald Trump is swept from power on January 20, that the pot is going to be removed from the burner and the boil become a simmer, allow us to disabuse you of that notion.

Yes, Donald Trump’s hard core cult following consisting of the most extreme of extremists, will shrink somewhat on the outer boundaries, but those who are committed to a long, volatile struggle against everyone they consider infidels, will continue to plot, plan and execute.

Parler, the upstart social media platform that arose in response to Facebook and Twitter’s tepid attempts to curb hate speech and incitement – has now sued Amazon, their web service host for discrimination against political speech. Amazon, quickly responded with their own brief to the court, explaining that Parler violated the terms of the hosting agreement by allowing hate speech laden with domestic terror implications.

Here are some samples of the sort of incendiary messaging Parler failed to address as per their contract agreement:

 “Fry’em up. The whole fkn crew. #pelosi #aoc #thesquad #soros #gates
#chuckschumer #hrc #obama #adamschiff #blm #antifa we are coming for you and
you will know it.”
 “#JackDorsey … you will die a bloody death alongside Mark Suckerturd
[Zuckerberg].… It has been decided and plans are being put in place. Remember
the photographs inside your home while you slept? Yes, that close. You will die a
sudden death!”
 “We are going to fight in a civil War on Jan.20th, Form MILITIAS now and
acquire targets.”
 “On January 20th we need to start systematicly [sic] assassinating [sic] #liberal
leaders, liberal activists, #blm leaders and supporters, members of the #nba #nfl
#mlb #nhl #mainstreammedia anchors and correspondents and #antifa. I already
have a news worthy event planned.”
 “Shoot the police that protect these shitbag senators right in the head then make the
senator grovel a bit before capping they ass.”

 “After the firing squads are done with the politicians the teachers are next.”
 “Death to @zuckerberg @realjeffbezos @jackdorsey @pichai.”
 “White people need to ignite their racial identity and rain down suffering and death
like a hurricane upon zionists.”
 “Put a target on these motherless trash [Antifa] they aren’t human taking one out
would be like stepping on a roach no different.”
 “We need to act like our forefathers did Kill [Black and Jewish people] all Leave
no victims or survivors.”
 “We are coming with our list we know where you live we know who you are and
we are coming for you and it starts on the 6th civil war… Lol if you will think it’s
a joke… Enjoy your last few days you have.”
 “This bitch [Stacey Abrams] will be good target practice for our beginners.”
 “This cu** [United States Secretary of Transportation Elaine Chao] should be…
hung for betraying their country.”
 “Hang this mofo [Georgia Secretary of State Brad Raffensperger] today.”
 “HANG THAt N***** ASAP”

One of my colleagues that regularly monitors other forums such as “Free Republic”, reports that the sort of sentiments quoted above, are commonplace there as well. It’s really all over the internet and these sites are amplifying the calls for more violent disorder.

Our “Kiss Off To Trump” Meme Contest – Frequently Questioned Answers

In fairness, when we discuss “Republicans”, we’re absolutely not referencing every man and woman who still hold that party affiliation, in or out of public office.  There are unequivocal and outspoken dissenters within the GOP, including such as Representative Adam Kinzinger of Illinois, who told ABC News Chief White House Correspondent Jonathan Karl and Political Director Rick Klein, that:

“There are going to be some hardcores that are always out there — for them it was about power. For them it was about being the Proud Boys and fascism and racism.  I do hope they start their own party because I don’t think there’s any room in a Republican Party for them.  I use the analogy of waking up Saturday morning from a real bad bender Friday night, just kind of looking around and going, ‘man, what did I do.”

Kinzinger, who was among the 10 GOP House members that voted for impeachment this week, is also known for pulling no punches about who he believes is the ringleader in an interview with CBS’ Major Garrett –  “I think the president for all intents and purposes is not the president. He’s just nuts. He’s going crazy.”

Chris Christie, former New Jersey Governor and erstwhile ally of Trump, has broken completely with him, telling George Stephanopoulos on ABC’s “This Week” that:

“What we had was an incitement to riot at the United States Capitol, we had people killed, and to me, there’s not a whole lot of question here.  If inciting to insurrection isn’t an impeachable offense, then I don’t really know what is.”

Chris Christie tells @GStephanopoulos Trump’s incitement of Capitol siege is an impeachable offense: “If inciting to insurrection isn’t, then I don’t really know what is.” https://t.co/FnD9YSf2TE pic.twitter.com/rONPP8C0x3

The Associated Press reports that in Missouri, state GOP Chairwoman Jean Evans had enough of the war talk. She resigned after she was barraged by calls from Trump supporters, some of whom demanded a military coup to keep Trump in office “no matter what it takes.”

“There’s a lot of good Republicans right now who totally disagree with what’s going on,” she told KMOX. “It’s been very scary and frightening and un-American from my perspective, and definitely not part of the conservative party I embrace.”

Nevertheless, the majority in the party are committed to the cause of a national civil war, regardless of the costs and it is being discovered that there is a contingent within Congress that are acting as cheerleader and concierge on behalf of insurrection.

Several members of the GOP caucus are now the focus of an investigation centering on whether they aided and abetted the domestic terrorists, even prior to January 6th. 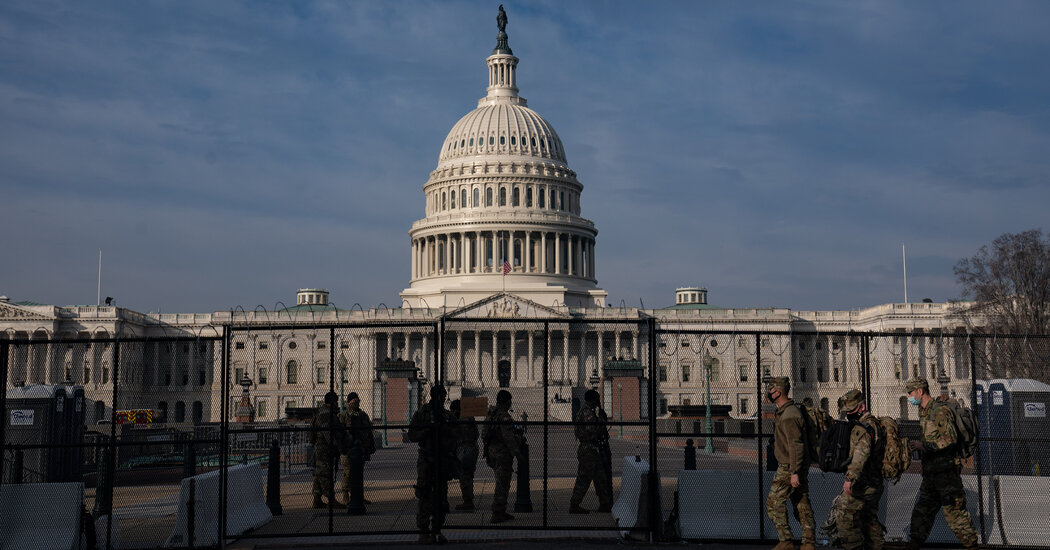 Newly seated QAnon aligned Republican House member Lauren Boebert (CO) tweeted out to the insurgents situational information in real time that endangered the Speaker of the House, Nancy Pelosi as well as other members that were being targeted that day.

Arrested Trump activist Ali Alexander told federal investigators that Arizona Reps Paul Gosar and Andy Biggs were among four lawmakers who helped him plan the Jan. 6 rally that led to the siege on the Capitol.

“We four schemed up of putting maximum pressure on Congress while they were voting,” Alexander said in a video posted to social media in late December, which has since been deleted. He said he the group hoped to “change the hearts and minds of Republicans” voting on election challenges that day.

That Alexander has named Gosar and Biggs as co-conspirators in the insurrection, does not bode well for them. A strong possibility exists that several House members on the GOP side of the aisle are going to be expelled as the ongoing investigation that FBI Assistant Director D’Antuono alluded to, proceeds in the days and weeks to come.

One final thought.  The next time you hear Trump militants refer to themselves as “Patriots”, I want you to call to mind this horrific and disgusting scene. Let it burn itself into your mind.

9-11 Reflections; Where We Were Twenty Years Ago Today   Editor’s Note: On this landmark, twenty years to the day since America was attacked by the forces of Islamic extremism, we invited readers to share with us their reflections, recollections and impressions of what they felt and experienced on the morning of September 11, […]