Democrats, Progressives, and others on the left need to face reality. They need to come to terms with the fact that progressive giant Ruth Bader Ginsburg’s seat on the high court will be filled by a person nominated by impeached President Donald Trump, and that Trump’s selection as a nominee will be based on how badly that person desires to go gunning for Roe V Wade, and that there is nothing Democrats can do to stop it.

Yes, Mendacious Mitch did refuse to even hold hearings on the confirmation of  Barack Obama’s choice Merrick Garland, citing proximity to the election.  And, yes, within seconds of the announcement that RBG had passed away,  McConnell gurgled and harrumphed a message stating he will hold a vote on Trump’s nominee, despite that voting has already started in this election.

Should we expect anything else? When has outright hypocrisy by the Republicans been a surprise? Yet, naively expecting Republicans to act with anything resembling integrity is a mistake that Democrats consistently make.

Sure, a few of the Republican Senators have borrowed a spine long enough to hold a presser and declare they won’t support the nomination.

But, you know they’re not serious. Just as soon as the cameras are off they return the backbone to the morgue on their way to kiss the ring.

Not one of the Republicans in the Senate even knows where principles are kept let alone how to stand on them. Besides, there’s nothing the Republicans can do to stop the process either. Assuming they even wanted to. Moscow Mitch will call for hearings and then a vote. Collins and Murkoski will make noise and then they and all the others will vote to confirm.

Undoubtedly they are already working on a speech explaining why they had a change of heart and “blah blah blah”. Not that they will need it. It’s not like outright duplicity has ever mattered to those who vote for Republicans.

We’ve seen this play before.

This time-worn political theater has been the cultural heart of the swamp for decades. Each new production plays out as predictably as a saccharine-laced Hallmark Channel rom-com. Except, the perfidious pageants that pervade playbills here are malodorous rather than mellifluous. We also know how this show ends already.

The manufactured twists and turns are just to keep people coming back after the detergent ads.

Yes, Progressives everywhere should absolutely continue to point out the hypocrisy and malevolence. But, party leaders need to stop acting like they can change the course of history.

Because while the Democrats are playing to the people in the front rows of the theater and the Republicans are performing for their masters in the Loge boxes, those of us in the cheap seats are being told the Democrats are the villains.  Trying to change the script on Trump’s choice for the Supreme court only reinforces that lie.

Ask a Trump supporter why their cult leader has not made good on his promise for better health care, or why the trade deficit with China is worse, or why Hillary Clinton is still out walking the streets, or about any of the things Trump promised; they will say, without pause, that the Democrats are the reason.

None of that matters to the people who support Trump because the real villains, they are told, are the Democrats. And the Democrats play right into the role.

It is like we are living in the movie  Joker.  To his rabid supporters, Trump is Arthur Fleck, the Democrats are the talk show host. 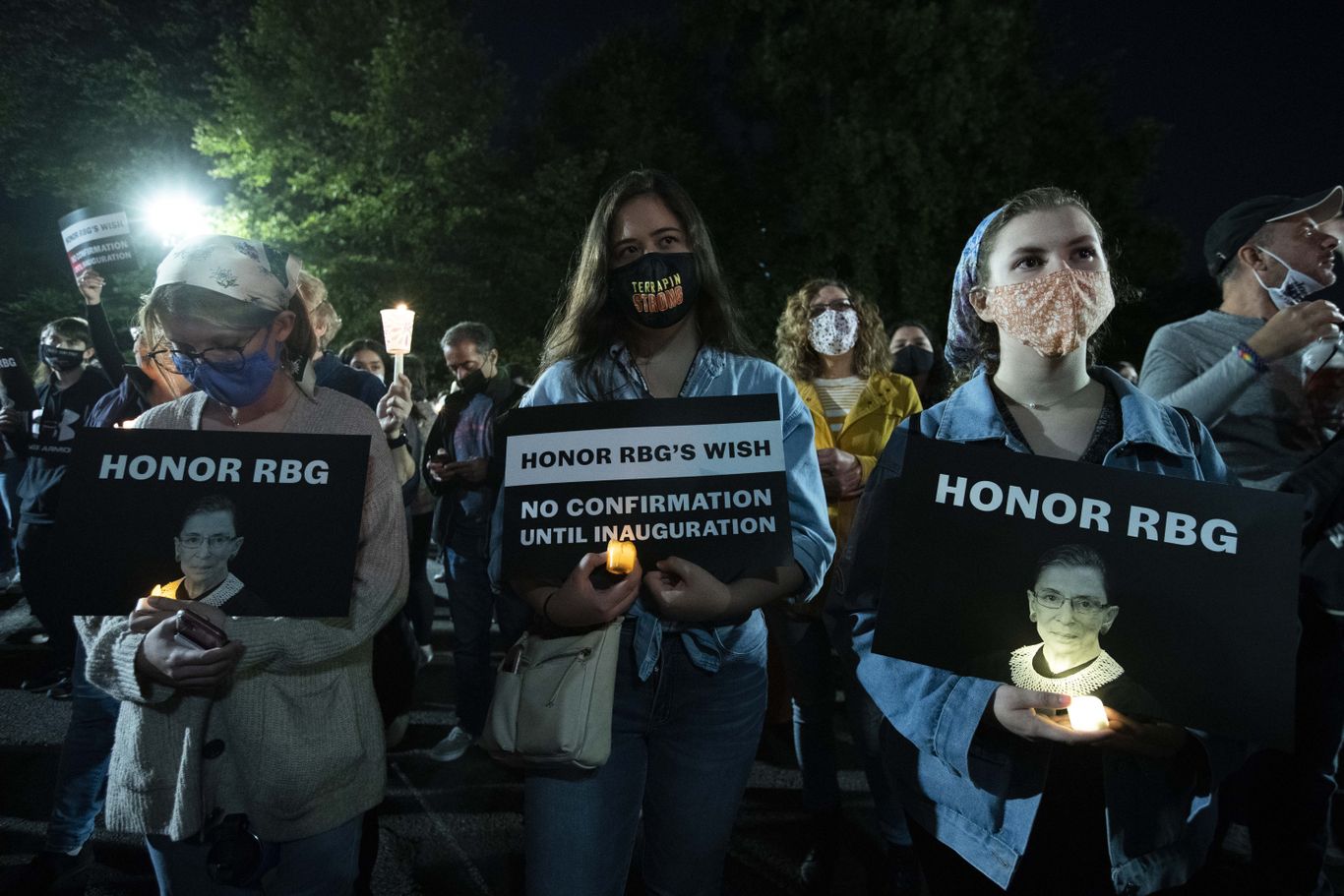 Poll: 62% say next election winner should pick Ginsburg’s replacement
Eight in 10 Democrats — and 5 in 10 Republicans — say the nomination should wait.

Most Americans  -including half of Republicans – believe that the Senate should not hold hearings on a replacement until next year.

The best play for the Democratic Party Leaders is to stand with the people and pound their fists with righteous indignation as Senate Republicans ignore the will of the voters. Because, when the Democrats make-believe they can stop this from happening, and then it happens anyway they look weak and stupid. Again!

Democratic leaders need to shut up about expanding the court too. Talk like this does not sit well with independent-minded people because it seems like trickery. Plus it gives Trump ammo for his whiney “They are out to get me” ranting.

I am not saying they should not expand the size of the court – In fact, I think the Democrats should go full scorched earth – but we have to win an election first, and we have to win it so big that it’s goddamn difficult to be stolen.

Make no mistake – the Trump crime syndicate is going to try everything to steal the election.  In fact, the Trump campaign is actively discussing ways to bypass a legal election. Trump also will not commit to a peaceful transfer of power when he is defeated.

Right now Democrats need to focus on the election with the same laser focus as Republicans.  Sadly RGB’s seat at the big table is lost.  Let’s not let her legacy be lost as well.

It’s okay to be upset, if you’re not then your humanity may need an adjustment.  Be upset in a way that is productive. Commit to doing everything you can to help Joe Biden win this election and for Democrats to take over the Senate.

Republicans have Willfully turned a once-proud party over to Trumpism and until they can wrest it back they deserve to never win another election.  Democrats may not be your cup of tea but this election comes down to Biden tea or the poison Kool-aid of Trumpism.

Make sure you and every one of your sane family and friends are registered to vote, and that they vote. Biden may not be your first choice or even your fifth choice but Trump is leading the country into Totalitarianism and Fascism  Our nation has never been so divided let’s bring it back together by showing the divider in Chief the door.

Shannon Hanson is a web developer and technology guru who lives in Montana. Shannon has been an activist and rabble-rouser for decades and has worked on national, statewide and local political campaigns including his own. Shannon owns a technology consulting company and teaches WordPress, social media, and technology classes at the local college. He also heads up a non-profit dedicated to the writing community. When he isn’t working he’s probably taking pictures, working on his novel, writing a blog post. walking in the woods with his dog, cooking or tinkering with something. Oh and he’s the world's oldest beginning drummer.

VIEW ALL POSTS BY Shannon Hanson

by Richard Cameron   Jeff Beck Is Gone But The Notes Linger On In The Infinite Universe   Geoffrey Arnold “Jeff” Beck  (June 24, 1944 – January 10, 2023)  Wallington, Surrey , is one of the top two of my rock musician idols with respect to the electric guitar. The other is Jimi Hendrix. […]

by Richard Cameron   The GOP Zombie Apocalypse Has Begun   While the national media has been turning its attention in recent weeks to the supposedly nascent internal warfare in not only the GOP, but also the factions that comprise the Republican party, we have been keenly aware of it for most of the […]