Laugh and the world laughs with you. Elect a failed businessman and reality show host as President and the world laughs at you. Allow him to completely botch the response to a deadly pandemic and no one is laughing any longer. They are just staring in disbelief and horror.

So it is with the state of America in the eyes of the world.

Last Spring a survey was taken throughout nine European Union countries including Germany, France, Spain, Denmark. It came back showing over 60% of the over 11,000 people who responded had “lost trust” in the US as a leader.

A majority believe they have watched the US plummet since the COVID19 outbreak began.  A graph drawn from the survey reveals only 6% of respondents’ views have improved for the US 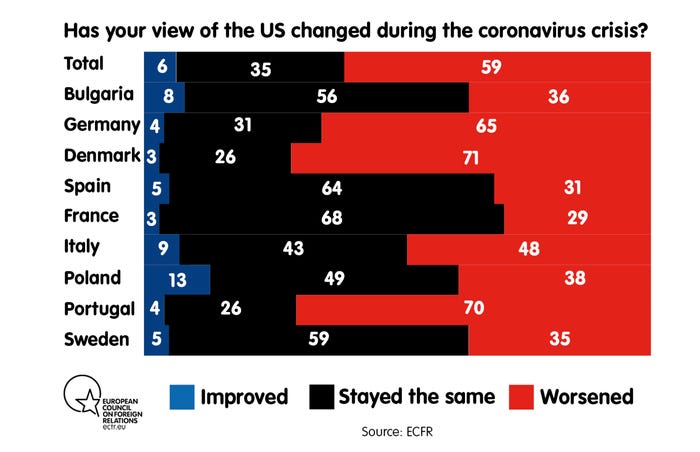 Katherine Butler with the Guardian reports that the survey, commissioned by the Berlin-based European Council on Foreign Relations, states:

“Europeans’ trust in the US is gone. Many have been appalled by the [US’s] chaotic response to Covid-19; the lack of solidarity it showed with Europeans in the 12 March closure of its border to members of the Schengen area; and its lack of leadership in tackling the coronavirus crisis at the global level – or even engagement with the issue (beyond a war of words with the World Health Organization)”

Regarding the Transatlantic Alliance, Susi Dennison, a policy expert helping to analyse the data from the survey, said, “Europeans have digested the fact that the US is no longer necessarily a friend for Europe in times of need.”

Trump Unfit To Lead In A Pandemic Is The Consensus Among Epidemiologists
by Richard Cameron   Trump unfit to lead in a pandemic -the consensus among Epidemiologists Accredited and recognized experts in epidemiology and public health issues are unified in their rejection of Donald Trump’s messaging, denial of scientific realities and negligence during the outbreak of the coronavirus in America. With some, it has been by […]

In May, Buzz Feed’s Alex Wickham reported the UK government was in “genuine disbelief” at the incredibly inept handling of the COVID response.

“There is a general level of incredulity over his comments but especially over the lack of testing,” a UK official said. “People [in the UK government] are used to the steady stream of tweets, but the last few days have caused more than the usual eyerolling. There is genuine disbelief.”

Another UK official said, “our COVID-19 counter-disinformation unit would need twice the manpower if we included him (trump’s tweets and public statements) in our monitoring.”

German news outlet, Spiegel International in April asked, “Donald Trump’s disastrous crisis management has made the United States the new epicenter of the global coronavirus pandemic. The country is facing an unprecedented economic crash. Are we witnessing the implosion of a superpower?”

They go on to report, and very accurately, that –

“One of the reasons the pandemic is hitting the country so hard is that no one appears to be able to hold the president back from his whims. He has systematically removed independent thinkers and experts from the White House and the government. In just three years, four national security advisers, three chiefs of staff and two secretaries of defense came and went.”

Henrik Enderlein, president of the Berlin-based Hertie School, a university focused on public policy, told  Katrin Bennhold of the New York Times, “When people see these pictures of New York City they say, ‘How can this happen? How is this possible? We are all stunned. Look at the jobless lines. Twenty-two million.”

In the same article Gerald Haug, president of Germany’s National Academy of Science explains that he believes the US has some of the best scientific minds in the world. “The difference is, they’re not being listened to. It’s a tragedy.”

Irish Times columnist Fintan O’Toole wrote, “Over more than two centuries, the United States has stirred a very wide range of feelings in the rest of the world: love and hatred, fear and hope, envy and contempt, awe and anger. But there is one emotion that has never been directed towards the US until now: pity.”

“The world has watched in horror as an American president acts not as the leader of the free world but as a quack apothecary recommending unproven “treatments.” It has seen what “America First” means in practice: don’t look to the United States for help in a genuine global crisis, because it can’t even look after itself.”

“Once there was the United States of the Berlin airlift. Now there is the image of the USS Theodore Roosevelt crippled by the virus, reports of the administration trying to take exclusive control of a vaccine being developed in Germany, and federal intervention to stop the commercial sale of personal protective equipment to Canada. The world has been turned on its head.”

Very recently an Australian journalist, Jonathan Swan, working for Axios, interviewed President Trump and Swan’s facial expressions of amazed bafflement and incredulity instantly became memes to express how so many in America and around the world feel every time Trump speaks. Mr. Swan is the intrepid journalist we all knew we needed.

Several countries have felt obliged to have their health authorities put out statements to counter “health advice” coming from the White House. From the suggestions of internal use or ingestion of common disinfectant to insisting on the efficacy of hydroxychloroquine, foreign officials have been both baffled and appalled.

Several overseas news agencies wrote on Trump praising Dr. Stella Immanuel and saying he “thought her voice was an important voice” even after being informed about her beliefs in aliens within our government and demons mating with women in their sleep which cause physical health problems such as Uterine cysts. (You can read more about Dr Immanuel here;

Other remarks from around the world include:

“If there is any world leader who can be accused of handling the current crisis badly, it is Donald Trump, whose initial disdain for Covid-19 may have cost thousands of Americans their lives. Even by the standards of his behaviour, the level of impudence is astonishing for the holder of an office that, until just a few years ago, was a considered reference in leadership for the democratic world.”

Rome: “Don’t they care about their health? They need to take our precautions. … They need a real lockdown.”

“We Italians always saw America as a model,” said Massimo Franco, a columnist with daily Corriere della Sera. “But with this virus we’ve discovered a country that is very fragile, with bad infrastructure and a public health system that is nonexistent.”

And from Japan, where our own Tom Logan teaches English, he reported to me a student’s excellent summation of the problem with Trump, especially during this Pandemic. She said, without prompting, in regard to Trump and his global effect:

“Donald Trump is a big nuisance to the entire world and that’s why he disgusts me. He says things in public that creates chaos to the world when we have all kinds of trouble. All he does is create a rumpus.”

As I write this I can’t help but imagine some reading it will be thinking, “Who cares what they think? We don’t need them. They need us.” But the truth is we do very much need them. The economy is Global whether some people wish it to be or not.

America cannot survive without a vigorous and healthy trading economy.  And right now we can’t even travel to most nations in the world.

Our reputation in the eyes of both foreign governments and foreign nationals is every American’s concern.

And we can’t afford to entertain a particular political persuasion’s fantasy of Nationalism as a successful ideal any longer.

Nor can we bully them into doing business with us on threat of losing our military support because the only real reason we are there in the first place is because it is strategically important to America to be there. That we are just the selfless caretakers of the world is another fantasy best left to die.

America Is No Longer The Greatest Nation On Earth
by Tony Wyman “The surest way to work up a crusade in favor of some good cause is to promise people they will have a chance of maltreating someone. To be able to destroy with good conscience, to be able to behave badly and call your bad behavior ‘righteous indignation’ — this is the height […]

I, for one, am not proud to be an American right now. For many reasons other writers here have so well reported in great detail: from racism to police brutality, bigotry and misogyny, our unhealthy love of guns and violence, and our lack of care for our own people.

And I am embarrassed by how far we have fallen in the eyes of a world that already had mixed feelings about us to say the least.

America hasn’t been made great. Rather the thin veneer of the illusion of ‘greatness’ has been peeled away like never before.  An historic and authentic wartime (WWII) leader, British Prime Minister Winston Churchill once said, “You can always count on Americans to do the right thing – after they’ve tried everything else.”

I can only hope Trump is the end of the “everything else” and we can, starting in November, once again do the “right thing” and get to the hard work of earning the world’s respect once again.

VIEW ALL POSTS BY Jennifer Puebla