Presidential Approval Polling Continues To Move Away From Trump

We recently published a report, arguing that Trump’s bounce in approval on his leadership and handling of the coronavirus, was and would continue to be a blip on the radar screen.

Trump's "Bump" On His COVID-19 Coronavirus Handling Is Now A Bust
The Bump just one day ... disappeared.

That has not only proved to be the case, but public opinion is turning away from (impeached) president Trump at an accelerating pace, evidenced by new polling this week, reinforcing the trend:

From March 29 to April 8, the number of Americans who disapprove of Trump’s job performance grew by 5.2% , with slightly more than half of those surveyed expressing disapproval of his operation.

When it comes to his grasp of the coronavirus pandemic, more Americans now disapprove 48.9% — than approve — 46.8% — of Trump’s job performance, according to data from March 24 to April 7. That is a 2.1% increase.

And then there’s the Real Clear Politics, polling average, indicating that the most recent of the polls reveal a sharper disapproval trend:

The Reuters / Ipsos poll has to have alarms going off at the White House.

Trump – because he sees as his only lifeline for a second term, getting what was already a breaking bad economy before the public health crisis, back on track, is disregarding the restraint and prudence of trained epidemiologists and virologists.  He is signaling that his patience for stay at home directives will be exhausted by the end of April.

The problem for him in regard to that, is that the public, with the exception of the hard core Trump cattle herd, do not favor second guessing or getting ahead of actual scientists on when the “all clear” signal should go out.

Over 80 percent of Americans say that the stay at home and social distancing directives should only be lifted when medical experts agree it is safe to do so.

Underlining that are the numbers showing that Dr. Anthony Fauci, who has persistently contradicted Trump’s false, ill informed statements, has more credibility than any other national figure, with confidence ratings from the public, close to 80 percent.

In comparison – Treasury Secretary Steven Mnuchin is the only national public official that ranks lower than Trump in the public’s estimation of reliability on the subject of the virus.

if you don’t have a crush on this man, do you even care about public health? pic.twitter.com/Z2EAgPf4As

To the question, “Do you support or oppose a stay at home order on a national level?”, 81 percent of those surveyed in the Quinnipiac University poll, respond in the affirmative.

Remarkably, even 68 percent of Republicans favored such an order. It should be pointed out that a “stay at home” order is considerably more permissive than a “shelter in place” order.

Getting back to the Reuters / Ipsos findings – 72% of all U.S. adults, including 79% of Democrats and 65% of Republicans, supported a requirement for mail-in ballots as a way to protect voters in case of a continued spread of the respiratory disease later this year. That is clearly another public rebuke that flies in the face of Trump’s gross hypocrisy  regarding the standards he applies to himself as versus what he expects of rank and file citizens.

Of greatest potential significance in the Quinnipiac University poll is how Trump’s performance as president is rated by independents. Remember that pretty much every strategist, Republican or Democrat, agree that partisan voters’ attitudes and inclinations about Trump are largely set in cement.

The X factor in the election is people who identify as independents. Trump is down 10 percent among independents in the Quinnipiac poll.

There is another factor that is mitigating against Trump and that is the broad spectrum of false assertions he makes that are contradicted virtually in real time. A sample of this is his claim that the United States leads in coronavirus testing.

Trump, in a press briefing on April 9, claimed that:

“I’m reporting today that we passed two million tests completed in the United States and they are highly sophisticated and highly accurate.”

His “two million” figure, is so far off as to be deliberately fraudulent. The actual number as reported have been performed by the Center for Disease Control (CDC) – including tests at state run labs, is 289,548 – as of their update for April 12th – approximately 1/8th as many as he boasts of.

The key word in Trump’s statement is “completed”. On the face of it, that is not true.  The number of tests that have been administered, is something different altogether.

There are non-confirmed estimates of tests being compiled by a variety of independent sources, some of which place the number of “tests performed” or administered –  at 1,781,000. Even with that, Trump has been caught with his pants down in terms of the statistic he floated.

Here, you can see that even with the unconfirmed numbers, Trump and his administration are grossly under performing: 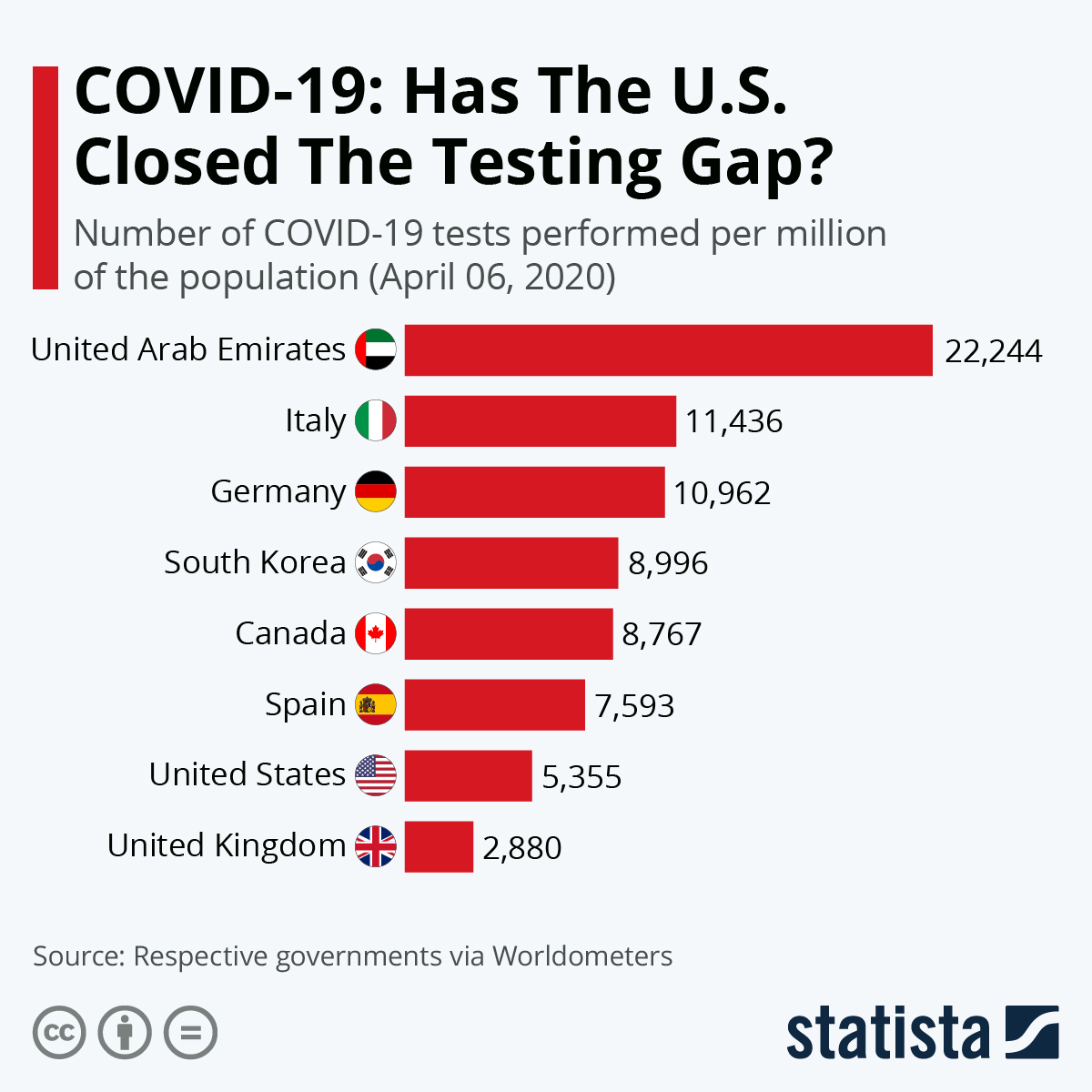 All of this raises another question. Is Trump learning disabled or learning dysfunctional or is he simply rounding off to the next even number in order to inflate his non-achievement?

To an extent, both might be true, because on the one hand, it is mere child’s play to discover the data I included, by performing an internet search taking under 5 minutes. On the other hand, he has an established pattern of disseminating self serving exaggerations.

Whether it is either / or – or both; this sort of unreliable messaging is now being broadly recognized by a wider swath of the electorate. It’s not helping the selling job he’s trying to do.

What it is doing, is inducing fatigue. Trump’s all too frequent appearances before television cameras are turning into a classic example of “familiarity breeds contempt”.

Deep Thoughts Robb Elementary Incident Response – Profile In Cowardice     Watched the entire 77 minutes of the maddening, incomprehensible and reprehensible display of chicken-shittery that elapsed at Robb Elementary last month in Uvalde, Texas during the active shooter incident that claimed the lives of 19 schoolchildren and two of their teachers.  The […]

Deep Thoughts by Richard Cameron   The Highland Park Shooter, Illinois State Gun Laws And The Crimo Family’s Damage Control         So I had a back and forth on Facebook with a friend who evidently had fallen prey to the talking point about the state of access to assault rifles so […]