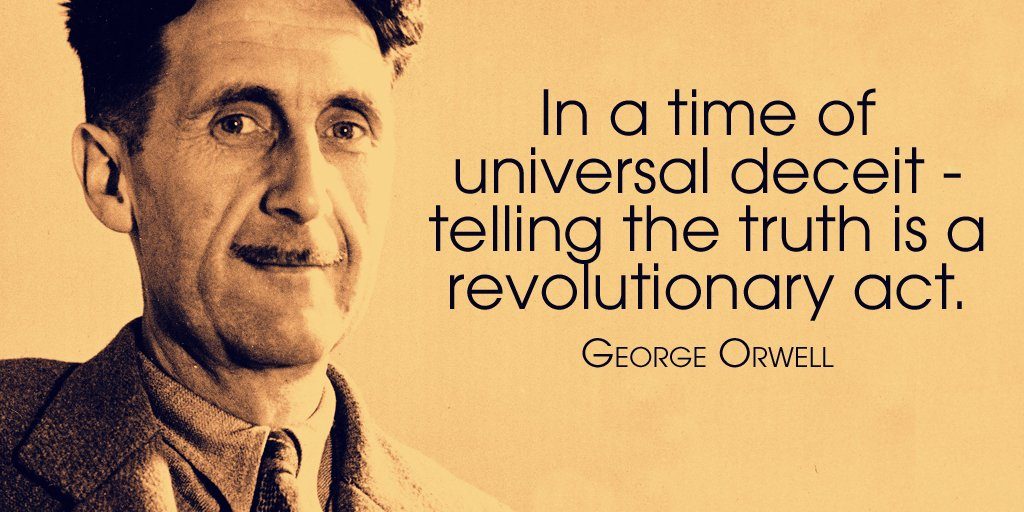 With today’s edition of Writer’s Lounge, we begin with a couple of items that we happened across that resonate against the backdrop of notable events that took place this week.

First is the passing on Thursday of Congressman Elijah Cummings, (D-MD). Cummings was first elected to the House of Representatives in 1996 and his 7th District seat included a large swath of Baltimore and its suburbs.

A noted civil rights advocate, he came in for criticism from Donald Trump, once Trump began to see in urban congressional districts like Cummings’, an opportunity to score political points with his base about the persistent effects and conditions of poverty and crime.

The root causes of those conditions are a matter of long running dispute between Republicans and Democrats and we won’t get into the weeds on them here, other than to say that the GOP blames government and the Democrats blame systemic racism and structural neglect.

Trump criticized the Democrat’s district as a “rodent-infested mess” where “no human being would want to live.” As with all of Trump’s political hand grenades, this one, intended by him to only damage the parties it landed on, also sent shrapnel flying back in his direction.

Cummings was swift to respond, stating, “Those in the highest levels of the government must stop invoking fear, using racist language and encouraging reprehensible behavior.”

One reason Cummings was on Trump’s radar screen was because Representative Cummings chaired the powerful House Oversight and Reform Committee, and presided over investigations of Trump’s conduct, including probes in 2019 dealing with Trump’s family members occupying positions in the White House.

Cummings’ close friend and fellow House member, John Lewis (D-GA). said that with the passing of the Congressman, Americans “have lost a great leader at a time of crisis in our democracy. When this nation needed him most, he became a moral voice ‘crying in the wilderness,’ and his words and actions called a reluctant nation to conscience.”

Naturally this did not survive the Washington Post fact check.

“Cummings has disputed this account. Cummings told CNN that he actually said Trump “could become a good president “if . . . IF . . . he took steps to truly represent ALL Americans rather than continuing on the divisive and harmful path he is currently on.”

National Compass offers its sincere condolences to Congressman Cummings’ family, in respect to his contributions to our system of justice and democracy.

Next is Rick Perry. Perry, tendered his resignation from the post of Energy Secretary this week, after vehemently denying on October 7th, that he had any plans whatsoever, to do so. Of course, his voluntary – as far as we know, departure has zero to do with any role he might have played in Trump’s grand scheme to extract damaging material from Ukraine about Joe and Hunter Biden. Oh, noooooooo.

Mr. Perry, an early critic of Donald Trump, who relented when offered the cabinet post of Secretary of Energy, was a natural choice for the assignment, it was believed at the time, because the Department of Energy would probably be one of those cabinet agencies that Perry would not require a clue from Mitt Romney to be able to recall.

Not only that, but an ironic pick especially since it was a department that he proposed to actually eliminate if he became president.  And to complete the Trifecta, ostensibly, Perry, having been Governor of Texas, had some degree of familiarity with the fossil fuel industry and consequently, was the recipient of $11.6 million in political donations from that particular industrial complex.

This only begins to scratch the surface of Perry’s appeal to Donald Trump. Aside from the fact that Perry would be a cheerleader of one of Trump’s signature policy conceits, namely that Climate Change (AGW) as it is understood by scientists, is “a hoax”; Perry also has been a darling of the Christian Right, giving voice not only to their grievances, but their aspirations of wresting control of government from the secular moorings it is firmly anchored to in the Constitution.

Perry overall, has a mixed record on the question of Green energy production. On the one hand, he was on the record as being a denier, as is Donald Trump, of climate change related to human activity, i.e., the production and release into the atmosphere of greenhouse gases. On the other, he has in more recent years, acknowledged at least in part, the advantages of energy diversification into renewable sources.

“I don’t think that the representative should be castigated and pushed aside just on the face of her comments relative to that she wants to live in a place where there’s clean air and clean water. So do I. How can we get there?”

The “how can we get there?”, is something Perry should have been on top of since the beginning of his tenure in the DOE. If Mitt Romney had been in attendance, I suppose he could have been of assistance once again. Maybe he’s thinking, but it is a slow process for him. 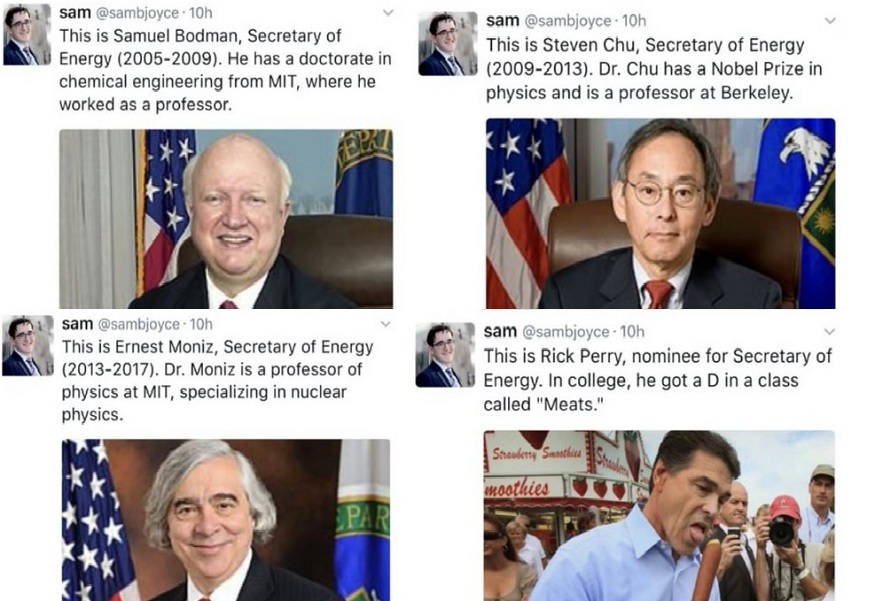 There’s more yet. Perry, is demonstrably not the brightest fossil fuel powered bulb in the ceiling – and as we all know (or should know), neither is Trump. Central to Perry’s initial appeal to Trump, is that Trump understands basically dumb people. relates to them and feels comfortable in their presence, so long as they are both ignorant and loyal.

There are so many bizarre episodes in Perry’s political career that for the sake of brevity, we had to pick one and go with it.  Perry told this story at an energy forum hosted by Axios and NBC News. Word salad alert.

“I just got back from Africa, I’m going to finish up with this, because I think I heard a lady say there are people dying. Let me tell you where people are dying, is in Africa, because of the lack of energy they have there. And it’s going to take fossil fuels to push power out into those villages in Africa, where a young girl told me to my face, ‘one of the reasons that electricity is so important to me is not only because I’m not going to have to try to read by the light of a fire and have those fumes literally killing people.’ But also from the standpoint of sexual assault. When the lights are on, when you have light that shines, the righteousness, if you will, on those types of acts. So from the standpoint of how you really affect people’s lives, fossil fuels is going to play a role in that. I happen to think it’s going to play a positive role.”

“I think I heard a lady say there are people dying.” That alone, is worth the price of admission to that exhibition of puerile tripe.

Nonetheless, I should note that Perry has accidentally included a couple of factual bits in this. One is that lack of development and infrastructure in Africa, particularly with regard to the basics – energy, water, agriculture (which are all related components), do account for a lot of people – millions, dying on that continent.

But what he does not see the irony in, is that a great deal of the problem in the energy realm of those circumstances, is precisely the unsuitability of fossil fuels and the reliance upon them (coal, kerosene, etc.). That fossil fuel can come to the rescue to prevent sexual assault, really puts it over the top.

Maybe it never occurred to him that sexual assault in Africa, is mostly a factor of post colonial chaos spurred by roving militias tied to governments with no rule of law and fighting over control of resources, such as fossil fuel. It only requires looking at a country like Nigeria to see the effects of that.

Despite this, Perry is not immune from rare and successful emulations of a blind squirrel finding an Acorn. Before Perry became a useful tool for Donald Trump, he was for a brief period of time, when contemplating a second nomination run, a vocal opponent of Trump, denouncing “Trumpism” and Trump himself. “He offers a barking carnival act that can be best described as Trumpism: a toxic mix of demagoguery, mean-spiritedness and nonsense that will lead the Republican Party to perdition if pursued.”

In other comments circa 2015, Perry observed, of Trump, “Donald Trump, the reality television star, is a great generator of ratings. But Donald Trump the candidate is a sower of division, wrongly demonizing Mexican-Americans for political sport,” Perry said. He then added, “He has piqued the interest of some Republican voters who have legitimate concerns about a porous border and broken immigration system. But instead of offering those voters leadership or solutions, he has offered fear and sound bites. This cannot stand.”

Whatever materializes from Perry’s inevitable testimony in Congressional hearings about the Ukraine extortion debacle, Perry’s prediction about Trumpism has certainly been born out by the fact pattern that emerged from it.

our resident social critic, informed me that she and her brothers were “raised on Monty Python”.  At first I thought, apparently erroneously, that she was telling me that she and her siblings had been, during their formative years, living off of an exclusive diet of the reptile of the genus, Pythonidae and that all of the snakes being consumed had been honored with the name, “Monty”.

I was curious if Python tasted anything like frog legs. My misunderstanding was resolved, when Jennifer assured me that she was referring to some obscure English comedy troupe or trope of a troupe, named infamously, “Monty Python”.  I requested a representative sampling of said act’s body of work, and Jenn provided me with this.

If it is funny as it is alleged to be, let me know and I will put it on my to do list.

To finish things up for this episode,  I wish to take this opportunity to familiarize our more recent reading audience with a staff contributor we are honored to be able to leverage the expertise on the vital topic of Russia and it’s national leader, Vladimir Putin, of whom Donald Trump is eternally indebted for withholding whatever Kompromat might be in the vaults in the Kremlin where such damaging information is stored.

I refer to our own Kseniya Kirillova – a native of Russia.

Kseniya is a Russian journalist that focuses on analyzing Russian society, political processes in modern Russia and the Russian-Ukrainian conflict. She writes for Radio Liberty and other outlets and is an expert of the Center for Army, conversion, and disarmament studies (CACDS) and the Free Russia foundation.

Ms. Kirillova was born in 1984 in the city of Kamensk-Uralsky, Sverdlovsk region (Russian Federation). In 2001 she graduated from school with a Silver medal. In 2006 she graduated from the Faculty of Law of The Liberal Arts University with a degree in Jurisprudence with honors.

She was twice awarded the governor’s scholarship of the Sverdlovsk region and has lived in the US since 2014. An investigative journalist and analyst focused on analyzing Russian society, mentality, the mechanism of action of Russian propaganda (including in the US), “soft power,” “active measures” and foreign policy, she is the author of several hundred articles, including research on Russian propaganda and soft power. Kseniya is also an important participant in the dissident movement in Russia.

National Compass already has a solid archive of reports from Kseniya, and you can go through them, here. Her next column is set for publication tomorrow.

And for your viewing pleasure and to circulate like the bacteria depicted, here are this edition’s cartoons: 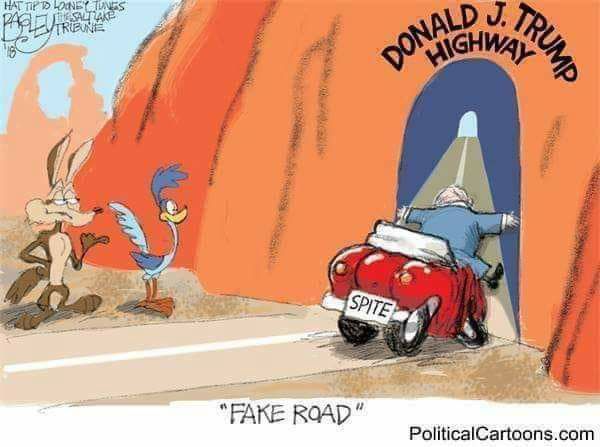 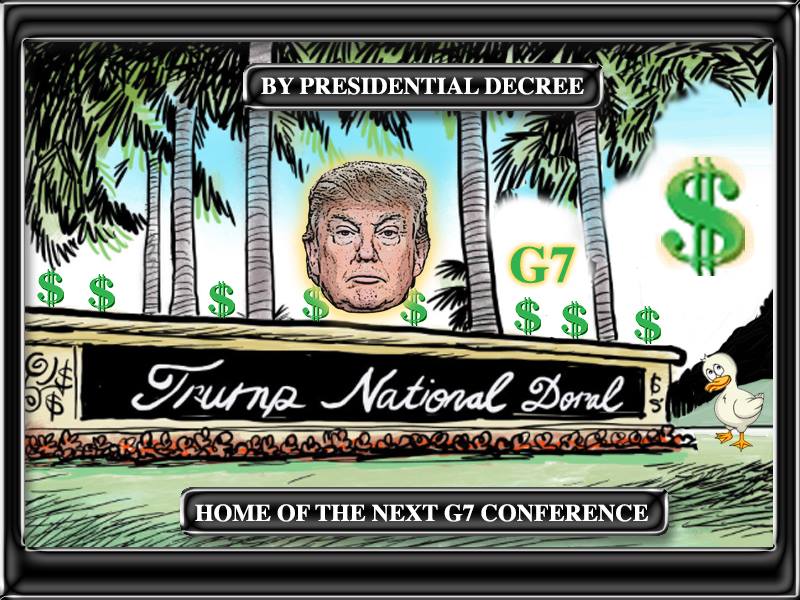