If illegal border crossings of poor and desperate Latinos was really a national emergency, as President Trump claimed Friday before going off for a weekend of golf at taxpayers expense, he and the Republican-controlled Congress would have found $25 billion or more in 2016 to start throwing up barriers before the Democrats knew what hit them.

The reason they didn’t fund a wall when Mr. Trump and his party had complete control of the federal government is no real emergency exists.  The number of apprehensions of illegals on the border is down dramatically from the 2000 high.  The number of Mexicans living illegally in the United States dropped from 6.9 million in 2007 to 5.4 million in 2016.  More are going home than are coming here.  And the number of illegal Mexican immigrants deported is actually higher than the numbers entering.

The real danger Mr. Trump was concerned about was the impact his failure to get a wall built would have on his approval ratings with the MAGA core supporters he can’t afford to lose in the coming 2020 election.

The problem is he’s willing to push against the limits of presidential authority established by more than 40 years of precedent to protect his political future and, by doing so, risks permanently upsetting the balance of power between the executive and legislative branches. The real threat of Mr. Trump’s declaration is it is an attempt to undermine our democratic order and system of government; it is an attempt to usurp the authority of Congress under Article 1 of the Constitution, specifically the vesting clause that establishes the separation of powers between the three branches of government, granting the authority to assign funding under the budget to Congress.

The Separation of Powers

Why is this a big deal?  Simply because the separation of powers exists to provide a series of checks and balances that prevent any of the three branches – the executive, legislative and judicial – from imposing their will unilaterally on the other two.  It exists entirely to keep someone like Donald Trump, a man who clearly has no patience for the tedious, time-consuming, power-sharing process that is democracy, from simply imposing his will on the nation.

And that is, of course, entirely what Mr. Trump is attempting to do here: impose his will on Congress and the American people who, by a 2-to-1 margin, do not want a wall built on our southern border.  Some Republicans recognize this and warn Mr. Trump’s move is a threat to more than just the GOP’s chances for success in future elections.

“The whole idea that presidents — whether it’s President Trump, President Warren or President Sanders — can declare an emergency and somehow usurp the separation of powers and get into the business of appropriating money for specific projects without Congress being involved, is a serious constitutional question,” said Sen. John Cornyn (R-TX).

Serious, indeed.  Sen. Cornyn, along with the handful of other rational conservatives still left in the GOP, a number dwindling alarmingly with each election cycle, have rightly warned that this declaration could lead to future Democrat presidents taking the same approach to redirect funds from areas popular with Republicans to address an “emergency” such as global warming, firearm violence or health care shortages.

National Republican strategist and conservative author Rick Wilson, often one of the president’s most passionate critics, pulled no punches after seeing Mr. Trump’s emergency declaration.  “The terrible and consequential action today—and a GOP response that at its bravest amounts to pathetic and indifferent ‘resistance’—is just Donald Trump clearing away one more barrier to authoritarianism. Sure, it’s funny watching him rant, but we’re laughing our way over the cliff.”

Laughing Our Way Off a Cliff

What Mr. Wilson warns us about isn’t just the threat that we may see future presidents use Mr. Trump’s tactics to run around Congress to fund pet projects, but that, the president intends to use whatever powers he can find to protect himself and his presidency. 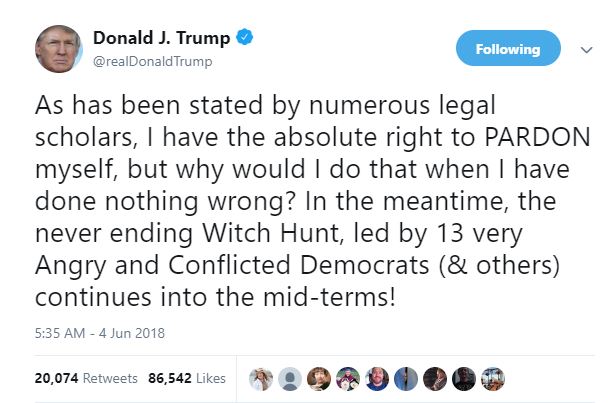 We’ve seen plenty of examples of this in the past.  Perhaps most startling was the 2018 tweet where Mr. Trump stated that he had the power to pardon himself, even though, as he claimed, he’d “done nothing wrong.”

This tweet was peculiar, not just because of how unusual it is to see a president flirt publicly with the idea of pardoning himself for crimes he’s alleged to have committed, but also because of what it exposed about Mr. Trump’s thinkings about the powers he has at his disposal as the nation’s chief executive and whether or not it is proper and appropriate for him to use them.

If you think about the fact that Mr. Trump actually considered publicly the option he believes he possesses to pardon himself for the alleged crime of conspiring with our chief adversary to illegally manipulate our presidential election and install him as president, it might make you look at the 1976 National Emergencies Act in a different light.

Consider this: the moment a president declares a national emergency, thanks to the law passed by Congress with only five “no” votes, he is able to set aside most of the legal limits to his authority.  In fact, more than 100 special provisions become available to him.  Mr. Trump, a man whose disaffection for democratic rule encouraged him to proclaim himself a “proud nationalist,” to praise bloody dictators as “strong” and who, during the campaign, both threatened to lock up his opponent, Hillary Clinton, and to suggest he might not “accept” an electoral college defeat, has, according to a report from the Congressional Research Service, the following powers during a state of emergency:

The Congress granted the president these powers, among others, predicated on the belief the commander-in-chief would always act in the country’s best interest, putting the well-being of the nation ahead of everything else.  But what if the president in office couldn’t be trusted to do that?  What if there was a reasonable concern the president would, instead, use emergency powers to avoid impeachment or conviction for a federal crime that could put him in jail for the rest of his life?

That might seem like an unlikely scenario in America, but Elizabeth Goitein, co-director of the Liberty and National Security Program at the Brennan Center for Justice, asked just that question in an article on presidential emergency powers for The Atlantic Magazine recently.  Citing Mr. Trump’s admiration for nationalist dictators like Philippines’ Rodrigo Duterte and Turkey’s Recep Tayyip Erdoğan, men who have both used declared national emergencies to maintain power in their countries, Ms. Goitein asked, “What would the Founders think of these and other emergency powers on the books today, in the hands of a president like Donald Trump?”

Citing the powers Congress gave the president in 1976 that the Founders chose not to grant the president, Ms. Goitein wrote, “Presidents have built on these powers with their own secret directives. What has prevented the wholesale abuse of these authorities until now is a baseline commitment to liberal democracy on the part of past presidents. Under a president who doesn’t share that commitment, what might we see?”

That is a question Congress should ask of President Trump and that should prompt them to restricting his powers to declare an emergency for the good of the nation.

VIEW ALL POSTS BY Tony Wyman