The fourth dimension is time+space, or the movement of 3D objects. Time is an interval separating two points of movement. There is no time without movement. And movement creates the dimension of space. In fact, we can’t even perceive three dimensions without movement (think of a globe: it looks like a flat circle until it or we move to see other sides). Every dimension of existence necessitates movement at a quantum level, but now we have movement on a macro scale. God’s Thought, vibrating in four dimensions, is manifested as a time-traveling woven tapestry of all matter.

The number 4 represents earth, or Creation, in sacred numerology.

Gravity (the force that creates an attraction between all particles) influences changes in and on the earth, influencing vegetation growth and animal activity as well. Gravity enables particles to influence movement and change in other particles. Every movement creates a quantum shift in the environment, which sets up a certain set of conditions to which other matter responds, ad infinitum. Without gravity, there is no change.

Mathematically strange things happen when an infinite series is added. Once a series reaches infinity. x = 0 becomes x = 1! Nothing becomes something when the infinite field of the force that attracts all particles to each other (gravity) is added.

According to quantum dynamics, movement creates energy waves (electromagnetic spectrum) that influence and reverberate off matter like a never-ending pinball game. Science also proves that atomic particles are attracted to others (gravitation), creating energy and matter to fill a void.

Obviously, gravitons (a hypothetical particle considered to be the quantum particle of gravitational interaction), another product of light-energy, exert influence in micro-dimensions, contributing to quantum change as a precursor to macro change. But large-scale movement, utilizing exponentially greater chunks of time and space actually shrinks our world! (There’s that Theory of Relativity, again!)

Prayers travel at the speed of thought.

Cars, trains, and jets have reduced travel time from a walking pace (about 3 miles per hour) to hundreds of miles per hour. Telegraph, telephone and email communication can send our words around the world in seconds. Distance is no longer a barrier to movement. My consciousness can “be” across the world faster than I can cross the street. This means that each individual influences vastly more time and space today than at any time in history.

Gravity determines the spin of atoms.

“Science has established that the physical world is made up of atoms spinning at very high rates. In questioning the nature of the Universe, many physicists and meta-physicians have developed an understanding that different rates of spin govern different states of matter, even consciousness.” “When objects from other levels of reality alter their rate of spin they are observed as increasingly physical phenomena in our dimension.” – Freddy Silva

Four-dimensional prayer is energy produced through gravitational movement – physical, mental and spiritual – that responds to a necessity by harmonizing with other energy, in tune with the Creator’s melody of Truth, creating matter to fill a void.

Gravity, as an infinite force, transforms zero dimensions of thought into the dimension that represents our direct line to the Creator. Some people call these phenomena miracles. Scientists call it physics. 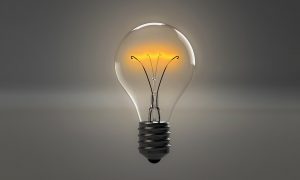 Have you ever wondered why the light bulb is a graphic metaphor for ideas?

When you are away from home for several days or weeks at a time, your house may seem unfamiliar, “flat”, or lifeless. That’s because there has been a lack of electrical energy produced through movement. Many cultures and faiths utilize dance (especially in a circle) to create religious energies.

There are many examples of movement-enhanced prayer. Buddhists use prayer-wheels. Jewish believers incorporate davening: praying while rocking, swaying and dipping their bodies. Native Americans conduct prayer dances. Some believers employ walking a labyrinth while praying.

Maybe movement is prayer – acting on faith that demands trust in God for every move. What would happen if we all stepped out in the kind of faith that attracted all other matter to the harmonies of God?

The fourth dimension of movement cannot be illustrated in the 3D medium of paper. Or can it? Film and videotaped action must have astounded those who could not have previously imagined seeing movement on a two-dimensional surface like a screen. Similarly, holograms were unimaginable until laser energy was developed. What higher dimensions await the discovery of perception? Prayer occupies every dimension.

Whether we are standing still or running, gravitons are at work, even in our thoughts. Every thought occupies time and space, effecting change in reality. What changes are your thoughts creating? Philippians 4:8 admonishes believers:

Every thought matters (get it?). Gravitons affect the collapse of the wavefunction. Once a certain amount of particle weight is applied to the electromagnetic wave, the wave collapses in time and space and creates actual change. Prayer is energy. It has real power in space and time. It moves mountains.

To read other installments in this series, click here.