In our previous report, we looked at the reaction to North Korea’s first known test of an Intercontinental Ballistic Missile (ICBM), on July 3rd of this year, both in Washington and internationally.

Last Friday (July 28), yet another such launch was conducted at  11:42 p.m. local time, was airborne approximately 45 minutes, and landed in Japan’s  economic zone in the Sea of Japan.

The regime of Kim Jong-un, boasted that they now are capable of targeting a number of cities on the U.S. mainland, including Los Angeles, San Francisco, Denver – and beyond that, the entire continent.  Jong un remarked that the “test-fire reconfirmed the reliability of the ICBM system, demonstrated the capability of making surprise launches of the ICBM in any region and place at any time and clearly proved that the whole US mainland is in the firing range of DPRK missiles.” 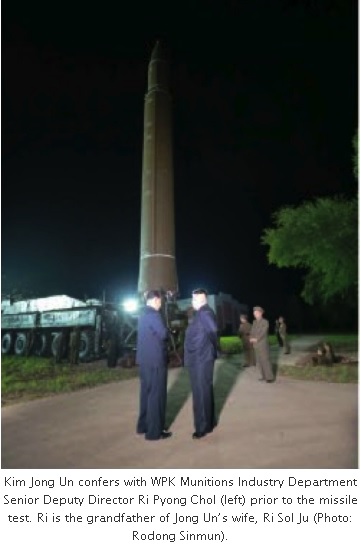 This report follows up with an outline of solutions that the Pentagon and the State Department are reviewing in response to North Korea’s escalations of its nuclear program and missile development. In an earlier report, we covered one of the approaches that, although it has not been officially acknowledged by the Defense Department, has enough circumstantial evidence of its existence to warrant discussion.

That strategy? “D” weapons – or digital weapons and in this case, Cyber attacks on DPRK’s command and control infrastructure – particularly relating to the launch operations.

Cyber operations against North Korean launch systems appear to be standard operating procedure at the Department of Defense.

In 2013 following one of Kim’s nuclear tests, then Chairman of the Joint Chiefs of Staff, Gen. Martin E. Dempsey, issued a statement saying that “cyberwarfare, directed energy and electronic attack,” (malware, lasers and signal jamming) have become an additional element of the defense arsenal.

The assorted tactics are known in the defense community as “left of launch” strategies – which also broadly include efforts to attack the launch platform itself.

Consequent to a North Korean cyber attack on the NSA’s Tailored Access Office, the United States Cyber Command was able to use the data from the operation to turn it back against Pyongyang and execute zero day attacks penetrating the Hermit Kingdom’s Command and Control (C&C) server network.

The obvious question with regard to this strategy – are the recent string of successful launches of intermediate and long range missiles from North Korea, indicative that the U.S. has exhausted the effectiveness of cyber warfare “left of launch” strategies?  The answer is probably no.

More likely, the Pentagon and military intelligence have decided that there is more to be gained at this point, by standing down the activation of cyber espionage and allowing Kim to test launch these missiles so that we can gain a better understanding of the DPRK’s capabilities, acquire additional data and continue to map the shifting launch zones.

David Kennedy, ex-Marine (although I am told there is no such thing) and military intelligence analyst, is strongly of the belief that our cyber warfare op teams have embedded coding somewhere in the software of the missile systems themselves, which are capable of being remotely triggered for in-flight destruction in the event that the U.S. believes North Korea is in actuality, (not merely conducting a test of a missile), intentionally targeting us.

Kennedy contends that the Pentagon is holding the deployment of that technology in abeyance, until an event arises that requires it to be activated.

Both Kennedy and noted cyber-security analyst Kenneth Geers believe that as matters currently stand, North Korea is vastly outmatched in cyber-warfare assets, even when considering that the DPRK is known to employ around 9,000 hackers and suspected of leveraging Chinese expertise.

The main obstacle so far for the U.S.,  is limited entry points for malicious code to penetrate, because from what we are told, North Korea is not networked with the World Wide Web. On the other hand, once a target is identified, it is only a matter of time before the means to electronically infiltrate them are discovered.

Kennedy says that North Korea’s cyber warfare program is “immature” in comparison to that of Russia, China or the biggest player, the United States.  As it is true with conventional warfare, Geers states that, “if it ever came to cyberwar between the US and North Korea, it would be an overwhelming victory for the West.”

The bottom line here, however, is that cyber warfare is only one facet of an overall strategy to neutralize the threat of a rogue state like North Korea being capable of launching missiles with nuclear warheads at America and its allies. There are other legs to the stool, which include diplomacy, sanctions and strategic nuclear defense.

And then there is also the avenue of using our trade relations with China to bring pressure to bear on the Kim regime. We’ll examine the viability of all of these in upcoming reports.