Certain individuals inclined to see all things Trump, through the lenses of rose colored glasses – including the economy, are ignoring the warning signs of the hard economic data. Credit Suisse, the Wall Street Journal and Fitch are not.

The backdrop to the data that these three observers of the real economy are examining, are the GDP numbers for the first quarter of 2017. Cheerleaders of the script that Donald Trump was going to usher in a new cycle of economic dynamism (‘Trumphoria’), wish to divert our attention from the fundamental barometers of the economy and onto metrics that most economists agree, has little to no correlation, namely the stock market. The stock market is not the economy, for a variety of reasons beyond the scope of this article.

The Gross Domestic Product (GDP), grew 0.7 percent in Quarter 1. That is the lowest number and the slowest pace in the last 3 years. And there is a related statistic – consumer spending, also at a pace that contradicts the optimistic Trumpanomics elevator speech. It rose only 0.3 percent.

Needless to say, the investment brokers and the ecosystem they protect, will use any sort of flimsy alibi to whitewash reality. The typical one about bad 1st Quarter GDP numbers is that the weather was crummy – too cold, snowy and stormy. It depressed consumer activity and ratcheted up heating bills.

What’s funny about that is that this time around the weather was unseasonably … warm!  Oh, but there is a song and dance for that as well. Here’s one that might trigger convulsive laughter.  Leslie Preston, a senior economist at TD Economics, told the Washington Post that she’s not concerned by the GDP report because:

“ it was unseasonably warm weather in many parts of the country in January and February. While warmer temperatures gave a boost to the construction industry, it cut down significantly on the amount of energy people used to heat their homes and cars, weighing on consumer spending.”

If you can make sense of how lower heating bills reduces instead of increases discretionary spending, then by all means explain it to me. I guess my thinking is too logical to grasp it.

Now to the retail environment. Last month, Credit Suisse disclosed that their analysis (illustrated in the above graph), showed that during the 1st Quarter 2017, there were over twice the number of store closings than the first year of the economic crash in 2008. The number of closings was up, YTD to 2,880 from 1,153 in the same period the previous year (2016) year-to-date.  They go on to estimate a total of 8,640 closings, which would again, exceed the 6,200 in 2008, when the impact of the economic Fukushima was still radiating outward into the public sector.

If these are indicators of a robust economic picture, I would shudder to see what a sickly one looks like. What is not a matter of conjecture are the store closings that have been announce by the retailers themselves as seen in this graph: 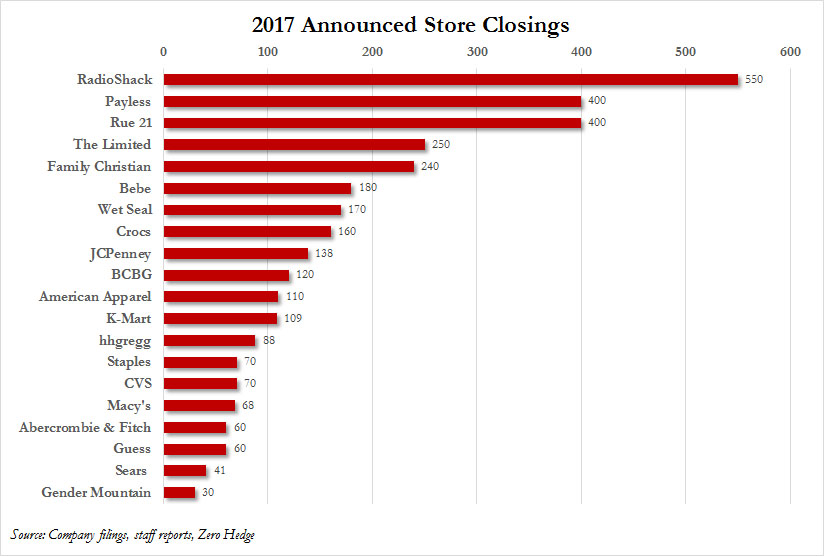 The Wall Street Journal, based on information it has received, reported that 10 major retailers are in bankruptcy protection status, including The Limited, Eastern Outfitters, Wet Seal, Payless ShoeSource, Radio Shack, BCBG, Gormans and Gander Mountain – through the end of April; more than all such filings for 2016 combined.

The bottom line is that the flowery deceptions of the media messengers of investment brokers, market indexes and banks, are not supported by the hard data that exists. They avoid discussing what you have just read, because it does not fit the false and dangerous narrative they are attempting to foster in order to bolster consumer and investor confidence.

Jennifer Keller Puebla   GOP Reminding Democrats Of Unity Call: Too Little Too Late I am a survivor of domestic abuse. In fact I’ve had multiple abusers over my life. For the most part none of the abuse was physically violent though I have feared for my life more than once with, I believe, […]