[Editor’s Note: National Compass published this story last May and we felt it would be valuable to re-publish it with the encouraging information the author has added to reflect events that have transpired with her family, since.]

As an older couple, my husband and I came together as most people our age were experiencing “empty nest” syndrome.  We were childhood friends who started dating when we were 40.  After blending our families we began planning our wedding during which we found out we were expecting a baby.  What should have been the most joyous time of our lives became one of the most tragic.  After a regularly scheduled sonogram at 16 weeks gestation, the doctor began talking about the anatomy of the heart.

It had been a long time since I took a biology course, so I was having a hard time following his conversation.  It wasn’t until he said, “I only see 3 chambers instead of 4,” that the reality of what he was trying to tell me began to sink in.

As my stomach sank and the world around me seemed to fade away I looked at the doctor and asked, “Wait, what? Are you trying to tell me there’s something wrong with my baby’s heart?”  The insouciant doctor answered “yes” as he promptly walked out of the room leaving me feeling alone and scared. Moments later a patient advocate walked in and the look on her face told me all I needed to know. I left with the name of a pediatric cardiologist who would perform a fetal echocardiogram in order to give us a better idea of what we were facing.

Endless thoughts and emotions cluttered my head as I drove home to tell my family the devastating news.

One week later, my husband and I held onto each other as we entered a local hospital for our fetal echo appointment.  For more than an hour, the doctor took images of our son’s heart while commenting on how active he was. Afterward, she took out a piece of paper where she drew a line in the middle. On one side she drew a “normal” heart, and on the other, she drew what our son’s heart looked like with the words “Hypoplastic Left Heart Syndrome” (HLHS) on top.

The doctor used her illustration to explain to us what HLHS was. She described how the left side of our son’s heart hadn’t developed and how he would be born with only half of a functioning heart. As those words rang through my head all I could think was, “How the heck can anyone live with only half a heart?”

I began to weep from a grief that rose up from the deepest part of my soul.

She then proceeded to describe the series of three open-heart surgeries our son would have to endure for him to have any chance of surviving. Throughout this process, she continued to say “You still have time to go home and make your decision.”  Initially, we didn’t quite comprehend the message behind those words. Instead of addressing it we began to bombard her with what seemed like an endless supply of questions and concerns. She appeared to become increasingly frustrated with each question we asked. Her answers were filled with fear, hopelessness, and foreboding. The picture she painted was grim, to say the least.

Throughout this surreal conversation, she continued to repeat how we still had time to make our decision.  Suddenly I had a moment of clarity where I finally understood what she was suggesting. I looked up at her and said, “Just so we’re clear here, termination is NOT an option.”  The look of shock and disgust on her face made me feel physically ill.

It was hard to comprehend how the baby who only moments before was making all of us laugh when his acrobatics skills kept challenging her image taking, had suddenly become something she considered disposable.  The baby we waited for, prayed for and loved completely was, in her eyes, not worthy of life because his anatomy wasn’t perfect. She gave us little to no hope, and when we walked out of there we knew we’d never be back.

We spent the next few days almost catatonic from grief. After which I dropped to my knees and begged God to give our son the strength he would need to get through this, as well as to guide and help us to fight with him.  Unable to pick up the phone to explain all this to the people in our lives, I instead created a Facebook page for him in order to keep our family and friends updated. This is where we asked them to flood heaven with prayers for him. His page began to be shared and before long attracted thousands of people who were lifting him up in prayer.

“For Where Two or three are gathered in my name, there am I among them” Matthew 18:20

Almost immediately, we saw God working in his life and in ours.  He began guiding and connected us to other heart families, who in turn, led us to one of the best hospitals and pediatric cardiothoracic surgeons in the country. Little by little we were beginning to gain some hope.

At our first appointment at Morgan Stanley Children’s Hospital at Columbia Presbyterian in NYC, they performed another fetal echo. Not only was the diagnosis of HLHS confirmed, but we were dealt another devastating blow when they informed that our son also had an intact atrial septum.  This means that the hole which is supposed to be in the membrane between the upper chambers of the heart was closed. The absence of that hole prevents the lungs from getting the blood they need to develop properly.  Our son’s chances of survival had just been all but eliminated.

In an instant all the strength and hope we’d built up had vanished.

Then, a ray of hope grew as the doctor told us how they’d also detected something unusual and very much out of the ordinary.  They called it a decompressing channel.  We would come to call it the baby’s “miracle vein”.  You see, it was a vein that our son developed that wasn’t a part of the normal human anatomy, and certainly shouldn’t be there, but it was there just the same. From what they could tell it was doing for his lungs what the hole in the atrial septum would have done if he had it.

Just the tiniest flicker of hope is enough to vanquish the darkness!

It was quickly dismissed by the doctors.  They informed us that they’d seen babies bodies try to compensate for defects yet they’d never seen them work.  This time we were given two options. Either termination or an emergency procedure called a “septostomy” that would be performed immediately after the baby was born to open up that membrane in the hopes of limiting the damage to his lungs.  Again, we chose life while we prayed for God to be in control.  We were going to fight for him, even though the odds were stacked against him.

I was scheduled for a fetal echo every month throughout the rest of my pregnancy and every time the first thing they did was check out his decompressing vein.  Not only did it not stop working as they predicted, but it continued to grow bigger and stronger throughout my pregnancy.  At one point, a doctor who’d worked in the NICU said to us “I’ve been here 25 years and I’ve never seen anything like this”.  We knew then that we were experiencing a true miracle. God was answering our prayers, and he touched this baby’s heart before he was even born. 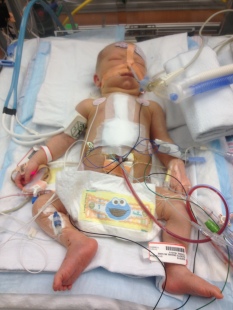 In January 2014 our son, Kyle Joseph Graham, was born. He was immediately swept away to be taken to the cath lab for the expected septostomy. However once there, they were able to see that his miracle vein was working and actually supplying blood to his lungs so it was determined that the procedure was unnecessary. His miracle vein saved his life before, and after he was born.

Kyle had his first open heart surgery at four days old. At 3 1/2 months, he was rushed to the emergency room because he was in distress.  Two days later on May 8, 2014, he had his 2nd open heart surgery. He recovered quickly and was sent home 6 days post op only to be rushed back 5 days later due to complications which left him fighting for his life. Through the grace of God he pulled through and for the next 3 years we got to enjoy every moment with this amazing child who brings love and laughter to everyone he meets.

In the summer of 2017, the day we dreaded finally came when Kyle’s cardiologist told us it was time for his third, and hopefully final, open heart surgery. On November 8, 2017, we yet again had to hand our son over to his surgeon. This time, by far, was the hardest one for all of us. Physically Kyle healed quickly even with a few complications however he is still dealing with the emotional trauma it caused. Yet his strength and resolve never cease to amaze us.

From the moment we got Kyle’s diagnosis we knew we were about to embark on the toughest journey of our lifetime. However, what we didn’t foresee was how it would also be the most rewarding and inspiring journey as well.

We could have very easily listened to the doctors and friends who actually had the audacity to say to us “just get rid of it, and try again.”  Instead, we chose LIFE.  We chose to fight for our son.  We were given little hope by the doctors, so we turned to the one who would provide us with the strength and hope we needed to get through. We gave it to God, and he made sure he let us know from the start, that he was there. He showed us that he still does work miracles.

Because of Kyle’s Journey of the Heart, we’ve become part of a world I wish didn’t exist- a world where 1 in every 100 babies are born with a Congenital Heart Defect (CHD), and 25% of those babies will need heart surgery and other interventions in order to survive – a world where more babies are affected and die from their CHD than all childhood cancers combined.  A world where children will fight battles that most adults couldn’t survive.  A world where all you want to do is take the place of your child but instead have to stand by and watch them endure the unthinkable.

Nothing about this journey is easy, but life isn’t always easy.  It’s usually during the most difficult times that the biggest blessings show up, where the miracles happen. Kyle is living proof of that. The majority of women who are diagnosed in utero are urged to terminate and rarely are they given hope as an option.

My heart breaks at the thought of how many women listened to their doctors. However, I have yet to meet a heart mom, even those whose babies lost their battle with CHD, who regrets choosing LIFE!

VIEW ALL POSTS BY Danielle Pechette-Graham

by Richard Cameron        Think COVID-19 Vaccines Will Be A Magic Bullet For The Pandemic? Not So Fast A new poll from Axios / Ipsos, appears to indicate that 51 percent of the American populous would be willing to receive one of the vaccines that are slated to obtain approval for COVID-19 from […]

by Richard Cameron     Unhinged – Trump’s Mental State And The Risk It Poses Until He Leaves Office   During the past 4 years, there has been ample examination of Donald Trump, from the standpoint of his psychological profile. Considerable analysis of his patently clear status as a malignant or extreme narcissist has been […]